The tree house is a secure and lavish platform under the African stars, with all the comforts that a guest can experience at a five star safari lodge. We take our guests to the tree house at sunset, where drinks and a scrumptious picnic dinner await them. The hours of African dusk can be enjoyed relaxing and absorbing the vastness of the bushveld as it transforms from day to night, before turning in for slumber beneath the incredible night sky.

The puma puma concolor (also known as cougar, mountain lion, panther and catamount) is the second largest cat found in the Americas (males typically weigh 53 to 90 kilograms) and has an impressive range stretching from Canada in the north to the southernmost tip of Chile. It also frequents a huge range of habitats from cold mountains and tundra through to humid rainforest and desserts; however, there is a general preference for canyons, escarpments, rim rocks and dense brush. As such, pumas can be a very unexpected surprise on any wildlife holiday to the Americas.

Pumas are members of the Felidae family with their closest relative in the Americas being the much smaller jaguarundi. Pumas are classic stalk-and-ambush predators and – as would be expected from their varied habitat – have a wide variety of prey species including large mammals such as deer, elk and domestic cattle; small birds; rodents and even insects when times are hard. Large prey is typically killed through strangulation which helps differentiate kills from jaguars which usually bite through the skull.

Pumas are crepuscular (being most active around dawn and dusk) and tend to lie-up in dense cover during the day making them particularly difficult to see and most sightings are chance encounters during night game drives and road transfers at night.  Territorial ranges vary greater depending on prey density and can be as large as 1000 square kilometres in northern Canada and as small as 25 square kilometres in some tropical areas.

Where to watch Pumas

Pumas are incredibly difficult animals to predict and almost all puma sightings happen by chance, particularly at night. Generally speaking, you have the greatest chance where prey densities are high, so areas that are good for jaguars (e.g. the Pantanal, Los Llanos, northern Belize, Manu) are also good for pumas. Occasionally, a wildlife lodge will find a puma kill and quickly construct a hide in the anticipation of a revisit and sometimes the daytime haunts (favourite trees, caves etc.) can be located and visited, however, the animals usually have a number of favoured places to choose from.

The high escarpments and canyons of the Torres del Paine National Park in Chile seem to be the only place where sightings of puma are anywhere close to being predictable. Here, there are a handful of remote caves where pumas are known to rear their young and the spring months (Sep, Oct, Nov) can often provide good results as the puma parents return to the caves regularly to feed their young. You will still need a good guide, a large amount of patience and a good deal of luck to get results. Night vision gear is also recommended as most of the sightings are after dark.

Probably deriving its name from the Tupian Indian word, yaguara “beast” the jaguar, Panthera onca, is the only Panthera species found in the Americas.

The third largest cat in the world – male jaguars can weight up to 159 kilograms (350 lb), twice their leopard equivalents – jaguars inhabit forests and open savannahs over an increasingly decreasing range. Once frequent in the southern United States and as far south as southern Argentina, excessive hunting has restricted jaguars to a handful of strongholds in Central and South America.

These impressive hunters are mostly ambush predators, usually dispatching their prey by biting through the skull. Strong swimmers, jaguars often hunt river banks and are not deterred from pursuing their prey (such as capybaras and caiman) into the water. Other prey includes large mammals such as deer, tapirs, peccaries, dogs and foxes. Smaller prey items can include frogs, mice, birds, fish, sloths, monkeys, and turtles. The jaguar is often described as nocturnal, but is more specifically crepuscular (peak activity around dawn and dusk) and can quite often be seen relaxing during the day on river banks, sand beaches and occasionally in trees.

The jaguar is a near threatened species and its numbers are declining. Threats include habitat loss and fragmentation. While international trade in jaguars or their parts is prohibited, the cat is still regularly killed by humans, particularly in conflicts with ranchers and farmers in South America. Although reduced, its range remains large; given its historical distribution, the jaguar has featured prominently in the mythology of numerous indigenous American cultures, including that of the Maya and Aztec.

Where to watch jaguars?

Jaguars are usually incredibly difficult to see in the wild and visitors to even the most pristine rainforest reserves are almost universally disappointed. Much of this is due to the terrain and territorial range of the animal. Female jaguars have a typical range of 25 – 40 square kilometres with males almost twice this. This is a huge area to hide even a large cat, particularly when the terrain is dense forest and the animals are understandably weary of humans. You stand chances of observing rainforest jaguars are in the Manu Biosphere in Peru, Chan Chich Lodge in Belize and the Iwokrama Forest Field Station in Guyana but you would need to be incredibly fortunate in any of these locations.

Jaguar Watching in the Pantanal

The world’s jaguar hotspot is undoubtedly is the Pantanal region of Brazil. There are a number of good reasons for this: firstly there is an unusually high density of prey species here (especially capybaras and caiman) particularly during the dry months (June – October), this supports a higher density of jaguars with each having a much smaller range than their rainforest counterparts. Secondly, the terrain is much more open here with the jaguars crucially choosing to hunt and rest on relatively open riverbanks. Finally, the local human population in the Pantanal is relatively tolerant of jaguars; fisherman, in particular, have been known to throw titbits to jaguars they encounter.

Although you have a moderately good chance of seeing jaguars throughout the Pantanal, the key area is the Cuiaba river just north of the small village of Porto Jofrey. Here, jaguars seem particularly comfortable with people and it is often possible watch jaguars resting, mating and hunting with no real regard to the observing tourists. Although there are a couple of other lodges in the area, the SouthWild Jaguar Houseboat is the only place to ‘guarantee’ jaguar sightings, being located in the heart of the best jaguar area and using a series of scout boats to scour the riverbanks. Sightings of six or seven jaguars during a three day period are now common here and the record currently stands at an incredible13 jaguar sightings – a quite remarkable testament to the richness of the Pantanal and the effort put in by the lodge.

Our selection of the five most impressive mammals of South America.  Whilst not quite as dangerous as their African counterparts, the South American Big Five are still spectacular animals to see in the wild.  With males weighing twice as much as the leopard equivalent, jaguars justly head the list followed by the mountain lion or puma. Giant anteaters are graceful wanderers of the open plains whereas giant river otters are feared pack hunters of the continents waterways.  Finally, tapirs are short-sighted, timid animals but one which you would never wish to corner.

Richard Madden’s latest round-up of essential safari equipment for men including night vision goggles and smart phone. Can you think of any essential kit that he has missed?

Even if not ‘follically changed’ we feel a good sun hat is a must. My preference is one of Tilly’s excellent hemp hats. What would you take?

The Bush Telegraph: what to pack on safari – him – Telegraph.

Here’s the formula for your average luxury safari camp: Faux artifacts plus tents and plunge pools add up to a look that’s neocolonial, tribal—or a bit of both. But the new Segera Retreat, on 50,000 acres of Kenya’s mile-high Laikipea Plateau, upends that tired equation. Its modern thatch-and-timber aesthetic may not be safari-specific, yet it looks right at home on a savanna filled with zebras, giraffes, and gazelles. The owners of the six-villa, two-house resort work with local Masai ranchers to preserve the plateau, where cattle coexist with wildlife and, in a twist, offer camel treks as well as game drives (from $1,100 per person per night, all-inclusive).

via This Is the Way to Do Safari: Kenya’s New Luxury Safari Camp : Condé Nast Traveler. 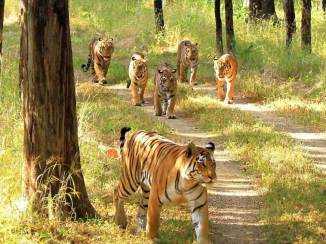 We’ve just been sent this photo of six tigers taken at one of our favourite Tiger Lodges, Tiger Trails in Tadoba National Park. This is a family group consisting of Scarface (Father), Madhuri (Mother), and the four cubs Mona , Geeta, Lara, Sonam (click on the photo for the lodge website).

The Wildlife Expert
Blog at WordPress.com.