After years of civil war that claimed the lives of more than six million people and a long history of corruption and political instability, the Democratic Republic of the Congo is not on many travellers’ bucket list.

But there is now one very good reason why they may be more interested. Africa’s oldest national park, the beautiful and other-worldly Virunga, in the east of the country bordering Rwanda and Uganda, reopened this year after the war ended.

It is a magical place, 3,000 square miles of snow-capped mountains, glaciers, active volcanoes, lush mountain forest and savannahs. Yet another battle is now playing out here, one between integrity and greed.

Congolese park rangers are fighting to protect many of the world’s last 880 mountain gorillas who live here – from both poachers and the threat of British oil company Soco International.

Wildlife on the Galápagos is under a new threat. The scientific group that has helped to preserve the islands’ giant tortoises and other unique creatures is on the brink of closure – because of a row about a gift shop.

Local traders have objected to the Charles Darwin Foundation running a souvenir shop at its research station at Puerto Ayora on Santa Cruz island. They claim it was siphoning business from their own shops and in July local officials, backed by the government of Ecuador which owns the Galápagos, ordered the station’s shops to be shut.

The impact for the foundation – which carries out wildlife research in the Galápagos and provides key scientific advice on protecting wildlife there – has been devastating.

David Swindler was on boat near the remote Alaskan city of Kaktovik when polars bears began chasing after his vessel. The 35-year-old said: “On one occasion, some two-year-old cubs were wrestling in the water.”They were going at it for a solid hour.”Finally, they got curious about our boat and started swimming over. “We started to back away, but they swam even faster. “I was taking video with my GoPro camera and they would dive under the water to get a closer look at it. “They even touched it with their nose.” Watch the video… Watch inquisitive polar bears CHASE wildlife photographers boat – Mirror Online.

The image, called Living Rock Art by Neil Aldridge, aims to “capture the energy and movement of the blesboks in a still frame”.

“I actually hadn’t envisaged that the result would so closely resemble Bushman rock art.”

Mr Aldridge is a contributing photographer to the BBC Wildlife Magazine, Wild Travel Magazine, South Africa’s Go! Magazine and has published a book Underdogs about the endangered African wild dog.

As The Lion King celebrates its 15-year anniversary in London this week, The Telegraph has put forward its list of the Top Five places for spotting lions in the wild. Can you suggest any others?

The Top Five places to spot lions in the wild:

This is the dramatic moment tourists on a safari stood their ground against a charging African Bull Elephant.

Rather than flee, these hikers at Kruger National Park in South Africa put aside their fears and faced down the raging mammal after they stumbled upon the creature in the bush.

And the onlookers kept their cool while one of the tourists captured the moment on a video camera when the beast squared-up to the group.

Will it be a flock of roseate spoonbills?

Bobcat kittens clinging to a tree?

Deer ghosting through the shadows?

Maum has taken thousands of wildlife images at the refuge in the past eight years and many are incorporated into the refuge’s on-site signage, website and printed materials. He’s self-published two e-books on the refuge and occasionally sells his photos.

But that’s not why he does it.

“I’m pretty much just a loner guy,” he said. “I’m happy just wandering around by myself taking pictures. You never know what you’re going to see.”

Did you know that after National Geographic published its first wildlife photographs in July 1906, two of the National Geographic Society board members “resigned in disgust“? They argued that the reputable magazine was “turning into a ‘picture book’”.

Luckily for us, it did turn out to become quite a picture book. Those first wildlife photos published in the magazine were captured by George Shiras, III, and marked quite a few “firsts.”

Shiras was a lawyer and politician by day — a U.S. Representative from the state of Pennsylvania — and a pioneering photographer by night (literally!). His nighttime photographs of animals represent some of the earliest examples of flash photography.

To achieve his shots, Shiras pioneered a number of different photo-making methods. One was to float silently across water in complete darkness. When he heard rustling nearby, he would point his camera system and snap a flash photograph in that direction.

See more… These Were the First Wildlife Photographs Published in National Geographic. 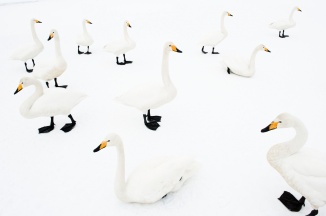 Natural History Museum’s new book released on Wednesday marks five decades of the WPY competition, celebrating the art of wildlife photography. Started in the 1960s, the 160 prize-winning and commended images represent 50 years of different times, styles and specialisms – showcasing some of the iconic images of wildlife on planet Earth, part of an exhibition in London from 24 October.

See more… 50 Years of Wildlife Photographer of the Year – in pictures | Environment | The Guardian.

The rise of jaguar watching tours in Brazil has brought a sea-change in the attitudes of ranchers.  The cats, once seen as a threat to livestock, are now seen as a big money draw.

But the recent discovery of a dead jaguar has raised an unexpected new threat: drug smugglers.  The fear is that drug smugglers who favour the quiet backwaters of the Pantanal are now shooting jaguars to deter the unwanted attention of tourists.